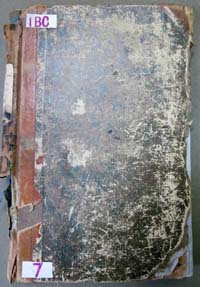 Londonderry Standard - Thursday 01 April 1858 - Emigration to the Cape. On Saturday, the magnificent 'Black Ball' ship Gipsy Bride, sailed for the Cape of Good Hope, with 500 emigrants, selected by the Hon. William Field, who has been deputed by the Cape Government to represent them in England. They were chosen almost entirely from the pastoral districts of Scotland, and a finer set of people have rarely left our shores. The Aurifera has been chartered for the conveyance of emigrants to Algoa Bay, and she will leave the Mersey on the 22d of April. Liverpool Albion.
Courtesy: British Newspaper Archive

Montrose, Arbroath and Brechin review; and Forfar and Kincardineshire advertiser. - Friday 09 July 1858 - Cape of Good Hope.
Dr Livingstone's expedition sailed from Table Bay on the 27th Apr8l, for the Zambesi. An elegant silver box, containing 800 guineas, had been presented to Dr Livingstone, as a testimonial, by the colonists. A proposal was made by the Governeor to establish five intermediate posts between the colony and the Zambesi, to ensure a line of monthly communication.
A fierce struggle continues on the frontier between the Bisutos and the Orange Free State. Sir G.Grey consented to act as mediator. Two Basuto towns and four French mission stations were destroyed. The colony was peaceful and prosperous.
The first batch of emigrants has arrived in the Gipsy Bride and gave great satisfaction.
Courtesy: British Newspaper Archive

The Cape Town Immigration Board at their last meeting, a few days before the departure of the mail, resolved to forward the following communication to the Emigration Commissioner in England.

Immigration Office, Cape Town, July 30, 1859.
The Honorable W.Field Esq., Emigration Commissioner, London.
Sir, I have the honour to acknowledge the receipt of three letter from you of the 6th ultimo, acquainting me, for the information of the Immigration Board, of the departure of the Burlington with emigrants on the 30th May, and of your having chartered the Lord Raglan to convey emigrants to Table Bay, which were to embark on the 16th instant. The board instructs me to inform you that the immigrants per Bride have all taken employment, and with the exception of a few, have quitted the depot - those remaining being the parents of children suffering from measles. Several remained also for some days owing to the unfavourable state of the weather, and the difficulty existing at the present time in procuring conveyance for their removal to the interior. The wages obtained by most of them are quite equal to former rates, as will be seen by a list accompanying this. The board desires me to call your attention to the circumstance of one of the immigrants per Bride, named Simon Lucas, having died of consumption the day after his arrival, and would recommend a more strict inquiry into the health of emigrants generally, and that none be sent out but such as are and have been for some time in perfect health, and in the habit of working for wages. Lucas, according to the statement of the surgeon-superintendant, Dr Pearce, came on board in a very delicate and precarious state of health, showing evident symptoms of consumption; and it has come to the knowledge of the board that several sent out on former occasions, particularly of the Scotch per Gipsy Bride, were invalids in search of health, some of whom have died, and a few recovered. Lucas leaves a wife and six children, with the prospect of a seventh, all of whom continue at the depot at the expense of the Government. With regard to farm labourers, the board considers it most undesirable that such immigrants should be encumbered with large families, and particularly with any number of young children, such operation as a hindrance to their obtaining ready employment, the wages they receive are sometimes as inadequate to meet their expenses that they naturally feel dissatisfied, and become disheartened. The board deem sit necessary to remark upon the practice adopted in some cases by the immigrants themselves of describing a man incorrectly in regard to his trade or calling, in proof of which I herewith enclose a list of names of men who declared the were refused to be received under the head of their proper calling, but were allowed to enter themselves under some other head, in order to render themselves eligible. This false statement has given rise to considerable unpleasantness and disappointment in one or two cases; it misleads the public, and causes the immigrant who refuses employment to suffer.