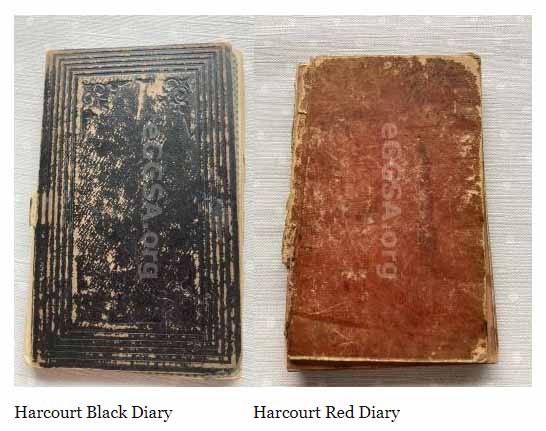 Following a talk she gave on researching in South Africa, Sue Mackay was contacted by a lady in the UK who had taken possession of two old diaries written in the 1870s by a relative, John Thomas Davis Harcourt (b1851 in Birmingham), who went out to join the Frontier Police. The diaries were acquired from a South African who no longer wished to be responsible for them, and they found their way to Jane Milne in the UK, who was known to be “the family historian”. With them were several WW1 diaries written by the son, William Douglas Harcourt, and these have drawn the interest of the Imperial War Museum, but Jane was keen that the two older diaries should also have a wider audience.

I suggested that the diaries themselves might be offered to the National Archives, but Jane was willing for them to be photographed and published on eGGSA, so that historians at the Cape could access them. I offered to transcribe the diaries, as I have experience of reading old handwriting following my transcriptions of the 1820 settler correspondence, and I enlisted the help of Geoff Chew in London, a retired South African academic, who has a greater knowledge than I have of South African history, and who was also familiar with most of the places mentioned in the diary.

It soon became apparent that Harcourt was present at many important meetings with tribal chiefs and that the diaries were very interesting historical documents, so thanks are due to Jane Milne for ensuring that they were not lost.

The Diary images can be seen HERE